The battle against backache… 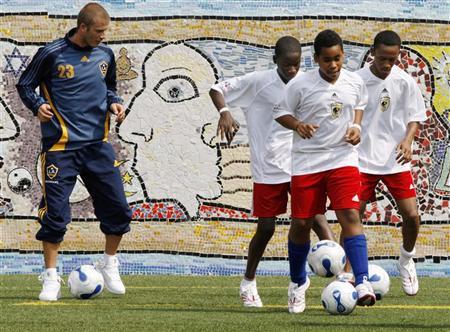 (Reuters Health) – Soccer players with “hypermobile” joints may have a higher injury risk than their less flexible teammates, a study of one professional team suggests.

So-called benign joint hypermobility syndrome is diagnosed when a person is found to have at least four abnormally flexible joints — based on tests of whether knees or elbows can bend backwards, the thumb can be flexed to touch the forearm, the pinkie finger can bend backward beyond 90 degrees and they can place their palms on the floor without bending the knees.

Hypermobile joints are not as stable as less-flexible joints, so in theory they could be more vulnerable to injuries like sprains. But researchers have come to conflicting conclusions on whether hypermobile athletes do sustain more injuries.

For the new study, UK researchers followed 54 men on an English Premier League soccer team over one season.

Of the players, 18 (one third of the group) were deemed hypermobile. And over the season, those 18 men suffered 72 injuries — for a rate of 22 injuries for every 1,000 hours of practice and competition.

By comparison, the 36 players with less-flexible joints sustained 61 injuries: a rate of just over six injuries per 1,000 hours.

Matt D. Konopinski and colleagues at Leeds Metropolitan University report the findings in the American Journal of Sports Medicine.

The study adds to evidence that general hypermobility contributes to sports injuries, according to Verity Pacey, a physical therapist at the Children’s Hospital in Westmead, Australia, who has studied the question.

In a recent study, Pacey and her colleagues found that across contact sports, players with joint hypermobility were nearly five times more likely to suffer a knee injury than their less-flexible counterparts.

That was based on a “meta-analysis” that combined the results of 18 previous studies.

It’s not known yet whether weekend athletes with extra-flexible joints face the same risks as professional athletes seem to, Pacey told Reuters Health in an email.

Amateur athletes do not go through the amount of intense training and competition that pros do, pointed out Gareth J. Jones, one of the researchers on the current study.

On one hand, that might protect the hypermobile weekend athlete, Jones told Reuters Health in an email.

“However,” he added, “they are also generally less well conditioned, which may increase the risk.”

In this study, soccer players’ injuries were often relatively mild — like muscle strains, cramps or tears in the legs.

But some injuries were severe, meaning they kept players out of the game for at least 28 days. And hypermobile players were much more likely to have a severe injury.

Twelve of the 18 athletes suffered at least one severe injury during the season — often a ligament or cartilage tear in the knee. That compared with only two of the 36 non-hypermobile athletes.

The knee is especially vulnerable to injury in soccer, Jones said. And for people with hypermobile joints, ligaments and other structures in the knee may be “less able to cope” with the stress placed on them.

Exercises to boost strength, muscle control and balance can help hypermobile people who already have joint pain or injuries.

And it’s possible that such training could curb their risk of future sports injuries, Jones said.

But whether that is the case is not clear.

“Unfortunately,” Pacey said, “at present we don’t have any strong research evidence to support ways we can reduce the risk of injury in hypermobile sporting participants.”

In general, researchers still aren’t sure exactly how harmful hypermobile joints might be. Some extra-flexible people have chronic joint pain, but many don’t. And there’s no evidence yet that people with hypermobile joints face an increased arthritis risk.

One issue is that studies have varied widely in estimating how common hypermobility is in the general public, or among athletes.

A recent study, though, found that among teenagers, hypermobility is common — a sign, the researchers said, that such flexibility is often perfectly normal.

Of 6,000 teenagers the researchers assessed, 27 percent of girls and 11 percent of boys met the criteria for benign joint hypermobility syndrome.

The current findings suggest that hypermobility could be very common in soccer, according to Konopinski’s team. But it’s not clear, they add, whether it’s any more common in soccer than in other sports, or compared with the public at large.

Pacey said there is research underway to better understand hypermobility, its effects and, when needed, how to manage it.

One unknown, Pacey noted, is why some people who are hypermobile in their youth become less flexible as they age. “We’ve yet to understand why this occurs in only some individuals.”