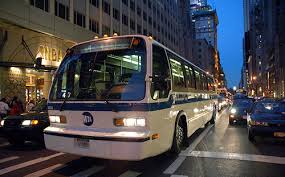 Witnesses to a recent fatal bus crash in the Bronx told law enforcement that the bus was veering erratically before flipping onto one side and striking a sign post. The post sliced through the passenger compartment almost to the rear of the vehicle, creating horrific carnage in the passenger area and nearly removing the roof. The bus was returning from a Connecticut casino to Chinatown in Manhattan when the accident occurred early on a Saturday morning, just after the bus entered the Bronx from Westchester County.

A host of reports soon after indicated that the driver, Ophadell Williams of Brooklyn, had a previous criminal conviction for homicide, as well as a grand larceny record for defrauding Police Athletic League donors. More to the point, his driving privileges under a different name had been suspended in 1995 for ignoring speeding tickets.

Williams told NYC police that he had been sideswiped by a semi before crashing the World Wide Travel bus on I-95, but no other evidence has corroborated this claim. Surviving passengers have told police that he fell asleep behind the wheel before the catastrophic bus accident.

The horrific accident killed 15 of 32 passengers, and several injured passengers remained in critical condition and on respirators days later. The state quickly revoked Williams’s license, and the circumstances behind the Bronx fatal bus accident will certainly direct attention toward the bus company’s screening process and supervisory practices.

Fatal transportation accidents that take the lives of citizens present a host of complex issues and a fierce desire for accountability. Companies that fail to enact or follow through on responsible hiring and training policies put innocent people in danger. Bus accidents, subway accidents and taxi cab accidents all have that one tragic factor in common: a passenger invested trust in the carrier’s ability to provide safe passage.

Federal investigators and NY State Police have studied the wreckage of the World Wide Travel bus, and a series of personal injury and wrongful death claims will seek to make sense out of tragedy as injury victims and surviving family members seek justice. Williams met with National Transportation Safety Board (NTSB) investigators soon after the accident, and a variety of evidence, from witness testimony to black box data, will likely come into play as legal claims arise.

Long distance bus accidents represent unique problems for the attorneys representing injured passengers. The earlier the attorney is hired the better for the case. The attorneys and their investigators will be able to examine the wreckage and do their investigation concurrently with the official investigation. Valuable information needed to protect the rights of the passenger will be developed and protected. Remember that the insurance company representing the bus owner will have mobile investigation units available to respond immediately to the accident scene where they take statements from injured persons amid the chaos. While the passengers should freely discuss their observations with the police and other government agents, they are under no obligation to talk to investigators for an insurance company. This is especially true while they are still trying to recover from their injuries.

NTSB investigations can take upwards of a year to be completed and reported. Much of what they discover would not be directly admissible in Court. Therefore, independent investigation by the attorney for the injured passenger is essential. The New York City motor vehicle accident attorneys who will handle those claims have one consistent goal: to pursue compensation that reflects the level of harm the accident caused to innocent travelers and devastated families.