Nearly everyone has four of them — broad flat muscles, known as obliques, that attach the rib cage and the pelvis on each side of the body and, until recently, have not really been part of the sports lexicon. 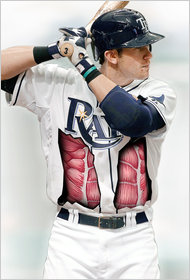 Among those afflicted by oblique injuries has been Tampa Bay’s Evan Longoria.

Stan Conte, the Dodgers’ head trainer, has analyzed core injuries in baseball since 1991.

But now they are. The muscles are particularly important to baseball players, who use them to rotate their bodies as hard as possible to throw a ball and swing a bat, and increasingly those muscles are being injured and putting players like Tampa Bay’s Evan Longoria on the disabled list.

Why this is happening is not really clear, but happening it is. The Los Angeles Dodgers’ head trainer, Stan Conte, was so intrigued that he stayed up through the night last week going line by line through a list he has assembled of the roughly 7,000 players who have gone on the disabled list since 1991.

“I had to do that because those injuries weren’t always called obliques,” said Conte, who has spent several years trying to build mathematical formulas to predict the physical problems that players may encounter. “Until the late 1990s, they were called rib cage injuries or abdominal injuries or lower chest injuries. As M.R.I. technology got better, the diagnosis became more particular and we began to see them called oblique injuries.”

For continuity, Conte then grouped everything — what used to be called rib cage or abdominal injuries two decades ago but are now called an oblique — under the term “core injuries.”

And what he found was that four players had gone on the D.L. with core, or oblique, injuries at this point a year ago. But in 2011, the total is already 14 — 12 players at the start of the season and 2 more since then. It is a small sample, Conte acknowledged, but he said it was significant nonetheless because the increase was in contrast to the general pattern since 1991.

That pattern, Conte said, showed that the number of oblique injuries had risen slightly in the last two decades. But over the last eight years, Conte said, the number had actually remained flat, leading to an obvious question: Why is there such a big increase this year?

“One theory I have is that players are transferring more quickly from the off-season to spring training games and to more competitive regular-season games, and the muscles aren’t holding up to the increased strain and force the players are putting on them in competition,” Conte said in a telephone interview.

Conte said that for some players, there might be a shorter period of time between when they report to spring training and when they actually start playing exhibition games. In fact, since 1991 a third of all oblique injuries have occurred in April. (Spring training injuries are counted under an April heading because the disabled list is not used before the season starts). The number decreases throughout the season, with just 1 percent of oblique injuries occurring in September.

Yankees center fielder Curtis Granderson was among four Yankees who injured their obliques during spring training this year.

“One of the first questions I was asked was whether I was taking more or less batting practice,” Granderson said. “I felt like I had been doing about the same amount from last year to this year.”

Granderson, who injured his oblique toward the end of spring training but started in center field for the Yankees on opening day, said that a player who might be swinging more might be more likely to injure his oblique.

Last season, pitchers who injured their obliques and went on the disabled list typically took about 43 days before returning to play compared with 31 days for position players.

Another theory in baseball for the rise of oblique injuries is that players are putting too much emphasis on strengthening their abdominal muscles.

“Personally I don’t think that’s true because I can’t imagine a stronger, more flexible, muscle that has more endurance being a bad thing,” Conte said. He noted that “nobody did these exercises” back in 1991 and that the number of injuries then was similar to the numbers in recent years, although 2011 is clearly different.

Yankees Manager Joe Girardi, who watched one player after another sustain oblique injuries this spring, said the whole thing remained a mystery to him.

“We’ve had two appendectomies, which I wouldn’t have really bet on,” he said referring to Adam Dunn of the Chicago White Sox and Matt Holliday of the St. Louis Cardinals, both of whom underwent that procedure earlier this month.

As for the oblique injuries, Girardi said, “I can’t really tell you why it’s happened.”

“Players are strong now and they take swings,” he said. But why that might lead to more oblique injuries, Girardi was not willing to say. “It used to be the hammy,” he said of the hamstring pulls that once dominated injury discussions. And no one, Girardi said, seemed to know why that was the case, either.