Work at Your Own Risk

A Freak Accident at the Queensboro Bridge, Until It Happens Again

The Queensboro Bridge off-ramps in Long Island City, where two cars have crashed, leaving one man dead and others badly hurt. 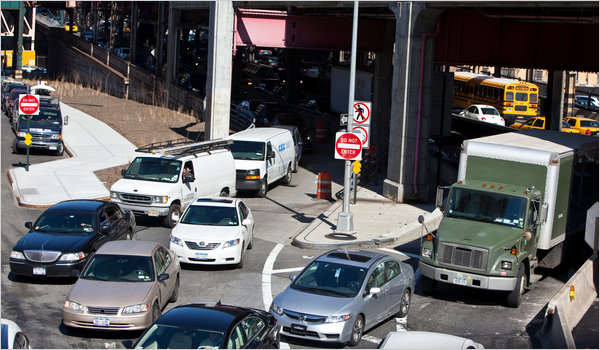 It seemed a grisly freak accident: a small sedan, navigating a curvy Queensboro Bridge off-ramp early one morning last week, careened off the road and smashed into a Long Island City storefront, severing the arm of the driver and injuring his female passenger.

A police officer keeps pedestrians from the scene of a car crash at a beauty salon on Queens Plaza South on Wednesday, the second at that spot.

Then, on Wednesday, it happened again: same intersection, same storefront, same time of day — even the same make of car, a Volkswagen. Once again, a driver lost his arm and a female passenger was badly hurt.

The crashes were not identical — a pedestrian was also killed in the accident last week — but the eerily similar events, just nine days apart, have raised concerns about a sharp turnoff at the end of the bridge ramp, which opens into a crammed intersection recently reconfigured by the city.

In both episodes, the cars appeared to be traveling at high speeds when the driver lost control, the authorities said, and each car rammed into a guardrail before reaching the intersection. “Excessive speed appears to be the dominant factor,” said Seth Solomonow, a spokesman for the city’s Transportation Department, who said that the off-ramp and its guardrails had not been modified since 2007.

The driver in Wednesday’s crash, Alexander Palacio, 39, of Queens, was arrested at the scene for aggravated and unlicensed driving. The police said his license had been revoked after six suspensions for speeding and failure to pay fines. His front-seat passenger, a 40-year-old woman whose name was not released, was in critical condition on Wednesday with severe head trauma.

The intersection where the crashes occurred — both happened around 4 a.m. — is a complicated merging point for a pair of turn-off routes from the bridge, and its traffic pattern has been significantly reshaped in the past three months.

Two off-ramps, running side by side, each deposit cars from the bridge onto Queens Plaza South, an east-west boulevard that runs parallel to the bridge. In the past, the street had three lanes to handle the load.

In January, however, one of those lanes was blocked off by concrete barriers as part of a large-scale redesign run by the city’s Economic Development Corporation to make the area more hospitable to pedestrians. The project, which includes wider sidewalks, a bike path and a park beneath the bridge’s overpass, called for a wider median with planters to take the place of the lane.

The barriers forced cars from both off-ramps to navigate a sharper angle while merging onto Queens Plaza South. On March 2, at the Transportation Department’s request, workers installed orange traffic barrels in the center of the intersection to help divert merging traffic into separate lanes.

But some shop owners in the area said they had been alarmed at the changes, saying that the sharper traffic angles seemed to direct cars closer than usual to their stores.

Narinder Singh, whose restaurant, Panini Tozt Cafe, was damaged by flying debris in the crash Wednesday, said his employees were afraid to stand behind the counter late at night. Unimpeded by heavy traffic, motorists can drive at high speeds off the bridge, their headlights glaring directly into his store.

Jimmy Van Bramer, a city councilman who represents the neighborhood, said he had heard complaints from constituents about the redesign. He called the similarities between the crashes “bizarre,” but wondered if drivers had simply not adjusted to the new arrangement.

“We’re all creatures of habit,” Mr. Van Bramer said. “It takes some time for people to adjust to the obstacles that are now there.”

The Transportation Department said it would add signs in the next week to remind drivers of the 30 mile per hour speed limit on the bridge. The city also plans to install rumble strips along the off-ramp, which already has multiple signs warning drivers of the curve. “Thousands of vehicles pass safely each day” over the off-ramp, the spokesman, Mr. Solomonow, said in a statement.

The initial impact in the crash Wednesday occurred at a guardrail just before the off-ramp curves into the intersection. The car, a 2006 Volkswagen Jetta, struck the guardrail with such force that its stanchion was partially pulled out of the ground.

The car then smashed into the Villa de Beaute salon, very close to the spot where a 2007 Volkswagen Rabbit last week struck and killed Anthony Buscemi, a 68-year-old taxi driver, who was walking along the sidewalk. The driver of that car, a 35-year-old Brooklyn man, lost an arm in the crash; his passenger, a 31-year-old woman, broke an ankle.

Kathy Anderson, who owns a check-cashing business adjacent to the crash site, said her landlord called her early in the morning and said: “You’re never going to believe what just happened again.”

Ms. Anderson described the similarity of the two accidents as surreal.

“I’m such a fatalist,” she said. “What happened is going to happen if your number is up.”