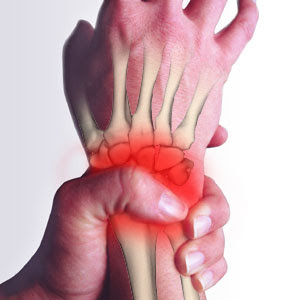 What is a Wrist Strain?

Wrist injuries are a more common problem among athletes. They are common because people have a natural instinct to put their hands out for support when they are falling to catch themselves. In doing this the wrist can be twisted, often with sudden force, and an injury, such as a wrist strain, can occur.

A wrist strain occurs when the muscles or tendons of the wrist, which are attached to bones that allow motion, are injured. Other parts of the body involved in a wrist strain include the soft tissues that surround the strain, including ligaments, nerves, blood vessels, lymph vessels, and the layers of tissue that cover the bones of the forearm.

Wrist strains can be aggravating not only because they are painful, but also because we are so dependent on the use of our hands that a wrist injury may hinder us from participating in sports we enjoy for some time as the healing process takes place. There are three types of wrist strains and they are graded according to the severity of the injury. The three types are as follows:

Mild (Grade I): This is a mild injury in which the ligaments have been stretched beyond their normal limits. The muscles may be slightly pulled but there is no tearing of the tendons or the muscles. There is no loss of strength with this grade of a wrist strain.

Moderate (Grade II): This is a moderate injury in which there is some partial tearing of the ligaments, muscles or tendons. Strength is not completely lost but is significant.

Severe (Grade III): This is a severe strain in which the ligaments are torn completely. The attachment of the muscle, bone, and tendon is ruptured and there is a separation of the fibers of the muscle. Strength is greatly diminished and the joint may become unstable. Severe wrist strains generally require surgery to be repaired.

The majority of wrist strains occur after a fall, such as slipping on ice in cold weather or when participating in certain a sport. The second most common cause of a wrist strain is prolonged overuse of the muscles and tendons in the forearm. Wrist strains are seen in sporting activities including, but not limited to, football, basketball, skating, rollerblading, street hockey, skiing, and snowboarding.

Taking certain measures when participating in specific sports can prevent wrist strains. For example, it is better to use poles that have a low-profile grip and not to secure the wrists to tightly in straps. When playing sports such as street hockey and football, or during rollerblading, skiing, and snowboarding, it is helpful to wear splints that will protect the forearms and the wrists.

What are the Symptoms of a Wrist Strain?

The most common symptom of a wrist strain is pain with movement or stretching. There may also be swelling around the joints and bruising, redness, or discoloration of the skin around the area of injury. Some patients have also complained of a burning or tingling sensation around the wrist.

Other symptoms include spasms of the muscles in the forearms, a loss of strength to varying degrees depending on the severity of the strain, an inflammation of the exterior covering of the tendon, calcification of the muscles or tendons, and a syndrome known as crepitation. Crepitation is when there is a feeling and/or sound of “crackling” when the injured area is palpated pr pushed on.

How is a Wrist Strain Treated?

Wrist strains are considered acute injuries. Most acute injuries, depending on their severity, are treated with the “RICE” method. “RICE” stands for Rest, Ice, Compress, and Elevate. A basic description of each is as follows:

-Rest for the first 24-48 hours after an injury is very important. Continuing to use the injured area can potentially make the injury worse and can even cause permanent damage. Use of the injured area should be increased gradually and only as tolerated.

-Ice used for the first 24-48 hours after an injury, ice is also important as it will help to reduce swelling of the joints and decrease pain. Ice packs are applied every three to four hours for approximately 20 minutes at a time. A wrist strain should NOT be iced for more than 20 minutes at a time.

-Compression is physically applying pressure to the area of an injury. The most common way compression is applied is to use an Ace bandage. The wrist should be wrapped from the base of the fingers to the top part of the forearm. Compression wraps should be snug enough to give support but not so tight as to cut of blood circulation. Compression is most useful in helping to reduce swelling of the joints.

-Elevation also helps to reduce swelling and promotes healthier circulation. The strained wrist should be held at a level above that of the heart.

While using the RICE method if there is still minor discomfort, over-the-counter medications such as aspirin, ibuprofen, or acetaminophen may be used to relieve pain. Topical ointments and creams, such as “Icy Hot” are also available to help reduce pain.

As a nationally certified Medical Assistant, I have had the opportunity to work in several different fields of medicine, including sports medicine. Wrist strains are very common injuries and can be treated at home if they are minor to moderate. A surgeon usually treats more severe injuries to repair damaged muscles, tendons, and ligaments.