Q&A: The Labor Legacy of the Triangle Fire 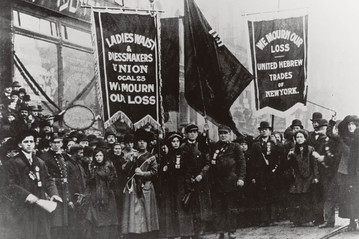 The Triangle Shirtwaist fire, which claimed the lives of 146 mostly female immigrant garment workers in 1911, is credited with galvanizing support for labor unions, as well as spurring reforms in workplace safety and city building codes.

As we prepare to mark the 100th anniversary of the tragic fire, Metropolis spoke to Cornell University’s Lee Adler about the labor legacy of the fire and the widespread outrage it caused among New Yorkers and the nation. Adler teaches public sector collective bargaining at Cornell’s School of Industrial and Labor Relations. The interview has been edited.

There was an uneasy labor backstory at the Triangle Shirtwaist Co. Where did things stand before the fire?

Adler: The fire happened in a factory that did not sign on to the loose collective-bargaining agreement terms. It was something called the Protocols of Peace that was established after a very long strike in 1909 and 1910. So this factory was a bit of an outlier at the time, and that acted as a spur to labor activists after the fire.

Certainly the organization and determination of the needle trade unions was fortified by the aftermath.

Who are the major political or labor figures that emerged from the Triangle fire?

Adler: In the New York state Legislature there were two very young politicians — one was Al Smith, the other was Robert Wagner. They were interested at the time in picking up the mantle of the fire and passing legislation. Some dealt with fire-safety standards and ingres and egress standards.

Frances Perkins by accident saw the fire, and that had an influence on her for the rest of her life. She was, first of all, a health and safety person connected to the labor movement in the teens. Ultimately, Franklin Roosevelt appointed her to be labor secretary.

Walk me through the direct aftermath. The Triangle fire is often credited with spurring labor reforms, but how did that play out?

In 1913, for the first time in the U.S. government, the Department of Labor was established. There had been previous things like it but there had never been a government agency. One of the first efforts was to compile statistics on workplace injuries. They looked at lead smelters, match factories, coal mines and steel making.

Did Triangle lead directly to a rise in labor unions?